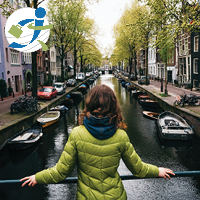 Before moving anywhere, especially outside of your home country, you should be as informed as possible on the way of life of that place. How easy is it to get around? What is there to do in my free time? How’s the weather? These are just a few of the questions you should find the answers to as you contemplate a big move. If you are thinking about moving to popular Amsterdam for study or work, here are some things to know and consider.

Amsterdam is the capital and most populous city of the Kingdom of the Netherlands. Its status as the Dutch capital is mandated by the Constitution of the Netherlands, though it is not the seat of the Dutch government – the national government is housed at The Hague. Amsterdam has a population of approximately 850,000 within the city proper and 2.4 million in the metropolitan area.

The city comprises much of the northern part of the Randstad, one of the larger urban areas in Europe, with a population of approximately 7 million. Amsterdam is one of the most popular tourist destinations in Europe, receiving more than 6 million international visitors annually.

Amsterdam is also known as ‘Mokum’ and is often called the ‘Venice of the North,’ because of its division into approximately 90 islands, which are linked by more than 1,200 bridges. It is located in the western Netherlands, in the province of North Holland. Amsterdam is situated 2 meters below sea level and is home to more than 100 kilometers of canals. The river Amstel terminates in the city center and connects to a large number of canals that eventually terminate in the lake IJ. The three main canals are Prinsengracht, Herengracht, and Keizergracht, and the city is connected to the North Sea through the long North Sea Canal.

In the Middle Ages, Amsterdam was surrounded by a moat, called the Singel, which now forms the innermost ring in the city, and makes the city center a horseshoe shape. The surrounding land is flat, formed of large polders, or land reclaimed by the sea. Parks and nature reserves make up 12% of Amsterdam’s land. A man-made forest, Amsterdamse Bos, sits in the southwest.

Amsterdam has an oceanic climate that is influenced by its proximity to the North Sea to the west, with prevailing westerly winds. Both winters and summers are considered mild, although occasionally both can be quite cool. Cloudy and damp days are common during the cooler months of October through March.

There are 14 tram routes, five metro routes, 25 bus routes (of which ten also drive by night), and Amsterdam is also served by ten stations of the Nederlandse Spoorwegen (Dutch Railways).

Three fare-free GVB ferries carry pedestrians and cyclists across the IJ Lake to the borough of Amsterdam-Noord, and two fare-charging ferries run east and west along the harbor. There also are privately operated water taxis, a water bus, a boat-sharing operation, electric rental boats (Boaty) and canal cruises that transport people along Amsterdam’s waterways.

Regional buses and some suburban buses are operated by Connexion and EBS. International coach services are provided by Eurolines from Amsterdam Amstel railway station, OUIBUS from Amsterdam Sloterdijk railway station and Megabus from Zuiderzeeweg in the east of the city (all websites available in many languages).

Driving a car is discouraged in the city center. Parking is expensive, and many streets are closed to cars or are one-way. The local government sponsors carsharing and car-pooling initiatives.

Amsterdam is one of the most bicycle-friendly large cities in the world, with good facilities for cyclists, such as bike paths, bike racks and several guarded bike storage garages that can be used for a small fee. There are about 881,000 bicycles in Amsterdam, outnumbering the city’s population.

Amsterdam is ranked as one of the safest cities in the world by international consultancy Mercer. Violent crime is not common in Amsterdam. Theft of bicycles does occur, so it is best to lock bikes before leaving them.

The secure foundation that underlies the carefree atmosphere in Amsterdam has a lot to do with the independent and live-and-let-live attitude of its residents. Amsterdam enjoys an open and tolerant society, and with 170 different nationalities represented, it is home to one of the most diverse populations of any city in the world. The combination makes for a laid-back feel, which seems to deter criminal behavior.

Amsterdam has many parks, open spaces, and squares spread throughout the city. Between Amsterdam and Amstelveen is the Amsterdam Forest, the largest recreational area in Amsterdam. Annually, almost 4.5 million people visit the park.

The ethnic makeup of Amsterdam is 47.5% of Dutch ancestry, and 52.5% of foreign origin. The population in the Netherlands has slightly more women than men. Dutch is the primary language spoken in Amsterdam, as well as an official language of the country. However, most Dutch people speak at least one foreign language — mainly English, as it is taught in schools during early education. Many Dutch people also speak German or French.

Amsterdam is home to more than 50 museums that attract millions of visitors every year. The Rijksmuseum, Van Gogh Museum and Stedelijk Museum are among the most popular.

The Heineken Music Hall hosts many popular music concerts featuring international artists. The Paradiso and the Melkweg are two other major concert venues. The Royal Concertgebouw Orchestra performs at the Concertgebouw, a venue that houses three concert halls. The Concertgebouw produces about 900 concerts and other events each year. Amsterdam’s large and modern opera house is the home of the Dutch National Opera, Dutch National Ballet and the Holland Symfonia.

Amsterdam hosts many electronic dance music (aka trance or club music) festivals and events, including the Amsterdam Dance Event (ADE), one of the biggest in the world. Others are 5daysoff, Dance Valley, Mystery Land, Awakenings, Loveland, Welcome to the Future, A Day at the Park and Valtifest.

Amsterdam’s most famous product is flowers, and during its Tulip Days festival in early May, many gardens are open to the public. The floating Singel flower market and the Tulip Museum are two other popular floral activities.

The Amsterdam Canal Ring in the old city center is a popular spot for locals and tourists. People walk the canal streets and take boat rides on the canals. Vondelpark, the largest park in the city, covers 120 acres (47 hectares), has around 10 million visitors a year, and is home to a theatre and playground.

The Anne Frank House, located in the center of Amsterdam, is one of the city’s most visited destinations. Visitors can see the rooms in the hidden annex to the house where Anne and her family lived for more than two years while hiding from the Nazis. The young Holocaust victim’s original diary is on display as a part of the Anne Frank House’s permanent exhibition.

De Wallen, also known as Walletjes or Rosse Buurt, is a designated area for legalized prostitution and is Amsterdam’s largest and most well-known red-light district. This neighborhood has become a famous attraction for tourists.

Amsterdam is home of the Eredivisie football (soccer) club Ajax Amsterdam and the ice hockey team Amstel Tijgers. There are two US football teams, the Amsterdam Crusaders and Amsterdam Panthers, three field hockey teams and a basketball team. The Amsterdam Pirates baseball team competes in the Dutch Major League.