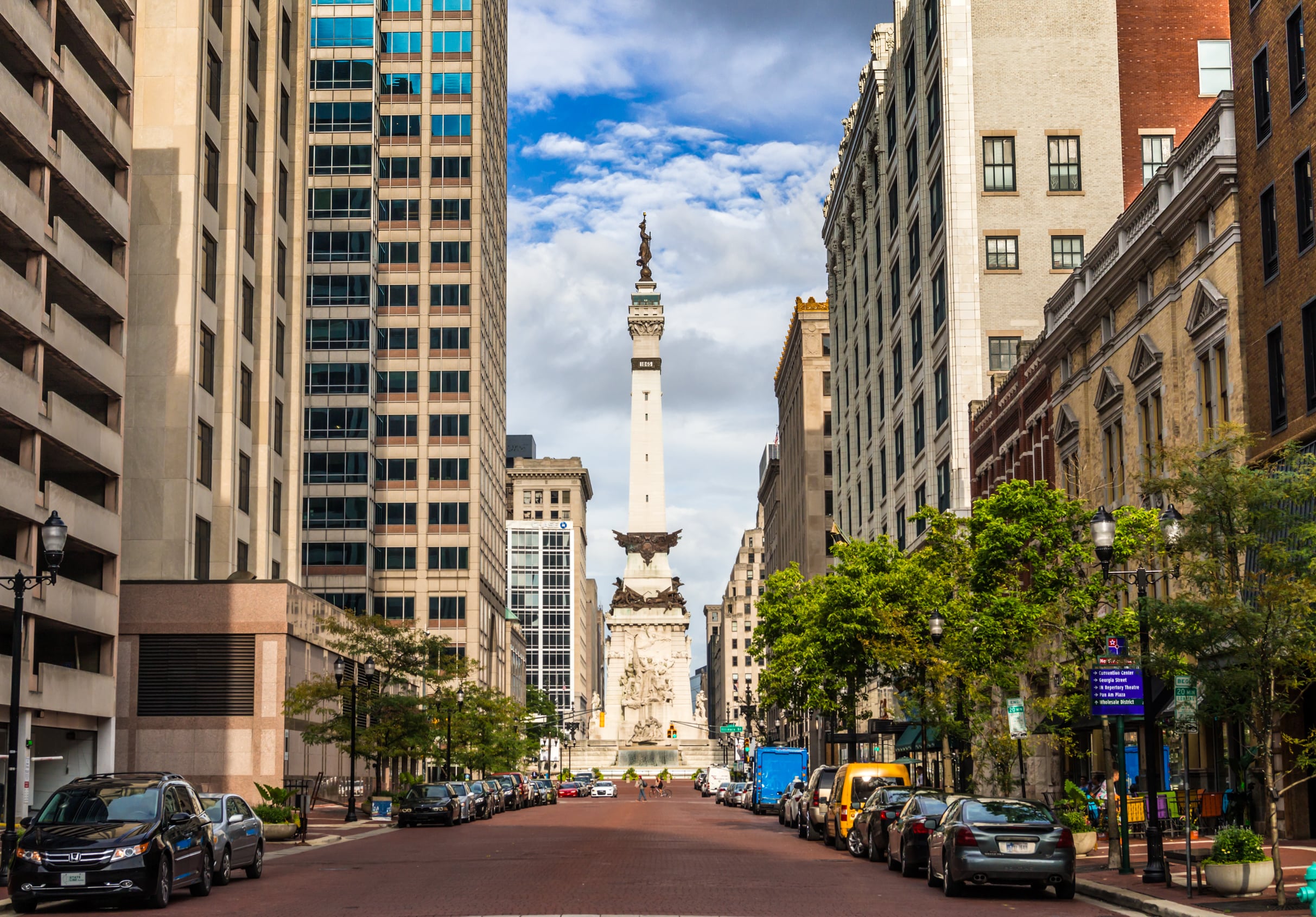 The city of Indianapolis is a key industrial, commercial and transportation center in the U. S. Midwest. It is commonly referred to as the ‘Crossroads of America,’ thanks to its easy accessibility from a wide variety of locations. Visitors to the state of Indiana become aware that they are in the presence of ‘Hoosiers.’ The appellation was adopted by the state more than 150 years ago and its derivation is cloudy and subject to great debate.

The Indianapolis of today was born from manufacturing and transportation, but the city has worked hard to shed its image as a Rust Belt city – and has succeeded. This was accomplished by an aggressive downtown redevelopment effort that began in the 1980s, built on a diversification of the city’s economic base that started in the 1960s. Downtown Indianapolis is a mix of gleaming skyscrapers and modern condominiums, historic homes and districts, sophisticated restaurants, outdoor cafés, sports venues, theaters, art galleries and boutique shops.

The area was hard hit by the 2008 recession, but it has since experienced a renaissance. Overall, employment grew by 2.8% last year. Indianapolis was recently named one of the best metro areas for jobs, according to Indeed.

Prior to the 1980s, manufacturing plants employed a good portion of the local workforce. Manufacturing is still important, but the city’s focus has expanded to include thriving health care, biotechnology, information technology, tourism and transportation sectors.

The region is home to 50 business headquarters and four Fortune 500 companies:

The diversity of the local economy is illustrated in the list of top employment occupational groups in Marion County, where Indianapolis is located.

Employment in the area is expected to be strong this year. The metro area added nearly 23,000 jobs last year, an increase of 2.1%. This year, analysts predict that jobs will grow by another 2.5%.

The current unemployment rate is a very low 2.6%, lower than the state of Indiana’s rate of 3.2% and the national rate of 3.6%.

The job market is expected to be brisk in the near term, according to the latest Manpower Employment Outlook Survey. Among area employers asked about their hiring plans for the coming quarter:

Over the coming quarter, job prospects are strongest in construction, durable goods manufacturing, transportation and utilities, wholesale and retail trade, financial activities, professional and business services, education and health services, leisure and hospitality, and other services. Employers in non-durable goods manufacturing plan to decrease staff, while hiring in information and government is expected to remain the same.

Indianapolis’ average wage is at its highest level since the recession and continues to rise. Wages increased an average of 4.1% last year. Industries with the highest wage growth between 2008 and 2017 include:

Average Hourly Wages for Selected Occupations in the Area

The state’s minimum wage is 7.25 USD, the same as the federal minimum wage. However, most people earn much more than that. The mean hourly wage is 23.74 USD in the Indianapolis-Carmel metro area, compared with the national mean of 24.98 USD per hour.

Information on the employment outlook for more countries can be found by logging into your GoinGlobal account, as long as your institution has a GoinGlobal subscription. Check with your career center to see if your school provides access to GoinGlobal.
Tags : Indianapolis , USA